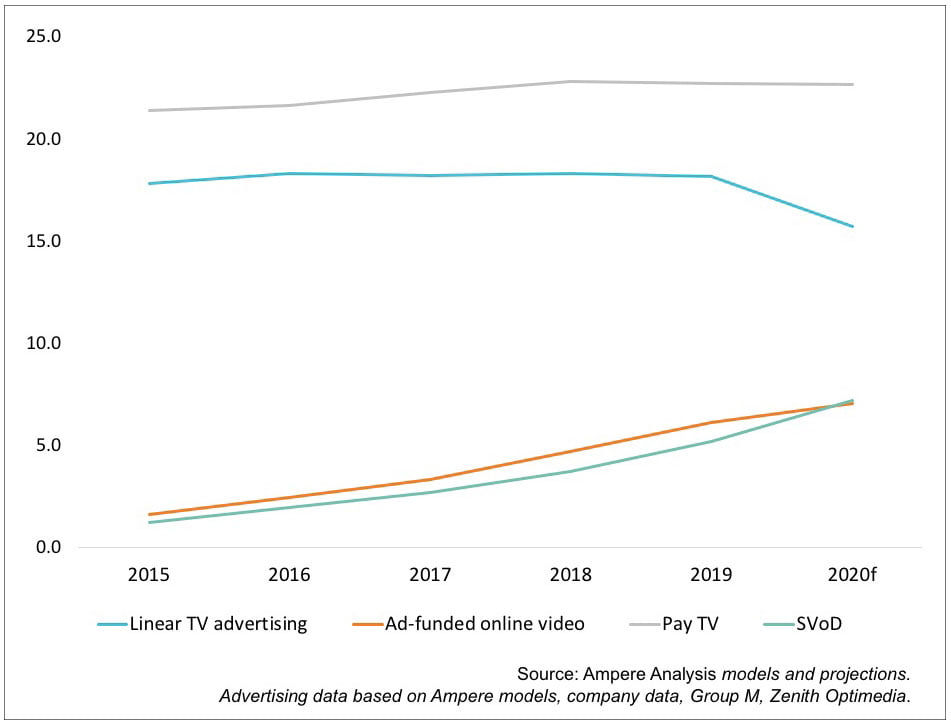 Ampere’s latest report found that broadcaster video-on-demand (BVoD) audiences tend to be younger and more affluent than those who watch linear television, which has contributed to an increase in digital-only commissions.

The research also showed how European BVoD services are evolving to match the demands of their younger viewers, who have been at the forefront of the migration away from linear TV.

For example, German service Joyn, a joint venture between German broadcaster ProSiebenSat.1 and US giant Discovery, has commissioned 20 original productions since its launch, with shows such as forthcoming thriller Catacombs targeting a younger audience. Half of Joyn’s unscripted originals feature YouTubers or social media influencers, with the service developing three new reality/docu-reality shows during lockdown.

Meanwhile, 30% of pubcaster France Télévisions’ forthcoming shows are destined for VoD. High-profile commissions for digital platform France.tv include Louis XXVIII, a sci-fi drama set in an alternative universe in which the French Revolution never happened, following a hapless 16-year-old protagonist who is unexpectedly crowned king.

While a growing share of broadcaster revenue is coming from digital platforms, Ampere does not expect ad-funded online video revenue to offset the decline in linear advertising revenue in the near term.

Ampere found that, over the past year, commercial broadcasting revenue has been in decline across major Western European markets – even before the first impact of Covid-19 on the ad market was felt – while digital ad-funded content revenue has grown.

The research firm said investment in online services is essential to ensure commercially funded groups can offset the declines in broadcast revenue brought about by audiences migrating to online viewing.

Ampere’s report also revealed that the UK is Europe’s leading BVoD market. The main terrestrial broadcasters’ services – BBC iPlayer, ITV Hub, All4 and My5 – are the leading ad-supported platforms in the local BVoD market. All have a heavy focus on catch-up, although Channel 4’s All4 continues to promote a deep catalogue of boxsets.

Léa Cunat, senior analyst at Ampere Analysis, said: “Broadcaster Video on Demand platforms were initially designed for TV catchup viewing, but in recent years broadcasters have been investing in technical enhancements and original content to beef up their services to attract a young demographic.

“Although a degree of uncertainty remains regarding return to business and advertisers’ confidence, Ampere’s outlook for BVoD revenue growth is positive. We anticipate that the shift to digital marketing will be accelerated if the behaviours consumers have adopted during lockdown persist following the reopening of economies.”